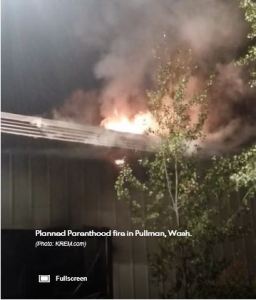 Nothing triggers cries of persecution faster than a Christian zealot thwarted.

Troy Newman leads Operation Rescue, an extreme anti-abortion organization that has advocated the execution of doctors—likely inciting the murder of Dr. George Tiller—while ironically condemning women who end ill-conceived pregnancies as murderers. Newman also is one of three board members for the “Center for Medical Progress,” the group facing federal and state charges over its secretive recording of Planned Parenthood employees to produce deceptively spliced videos.

The Australian immigration code treats people like Newman as undesirables—with reason—and when Newman, on a mission to agitate against abortion care, tried to board a plane to New South Wales, his visa was revoked.

Seems pretty clear in this case.

In the words of Labor MP, Teri Butler, “Anyone who advocates the execution of doctors or compares women who seek terminations to murderers clearly fails the Australian community’s character test.”

But Newman sees himself as a victim. “Please pray for me. I’m stuck in Denver airport like a man without a country,” he wrote on Facebook, which lists the Bible and The Art of War as his reading list. Then he got onto a plane without a visa.

Martyr Complex At Odds with Reality

Mercifully, Australia’s high court appears prepared to deport him.  High Court Justice Geoffrey Nettle ruled that Newman threatened “the good order of the Australian community.” . . . “He does not come to this court with clean hands,” Nettle added.

Obviously, Newman is a man with a country, or we wouldn’t be stuck with him here in the U.S. But his hyperbole is classic Christian persecution complex (CPC).

Despite having co-authored a book advocating the execution of abortion doctors, Newman insists that he is being mistreated. “The revocation was based on a pile of lies, including the idea that I promote violence,” he added to his Facebook on Wednesday. “My 25 year history of peaceful, prayerful action speaks for itself.”

Never mind that the fabricated shock videos produced by the so called Center for Medical Progress have triggered violent threats, doxing, hacking and denial-of-service attacks against abortion care providers, and likely clinic arsons in Washington and California.

Genuine and horrible persecution of Christians exists in the world, often in countries dominated by Islam, which—like Christianity—makes exclusive truth claims and denigrates outsiders. But the loudest cries of persecution tend to come from fundamentalist and Evangelical Christians who are safe and well-fed, but who are being thwarted from foisting their views on others:

Bible and Tradition Set Believers Up For Persecution Complex 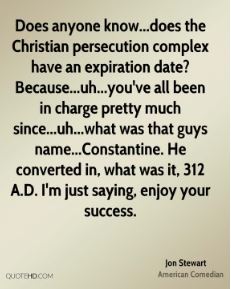 Every religion has an immune system–a set of teachings that inoculate believers against doubt or defection–and one part of Christianity’s immune system is a group of teachings that brace believers to expect persecution simply because they are good people who love Jesus. This expectation that Christians will be persecuted—not because they often are obnoxious or wrongheaded or causing harm but simply because they are Christians—is a theme throughout the Bible that was later reinforced by a long Christian tradition of celebrating martyrs.

In addition to an immune system, every religion also has a reproductive system. In Christianity, a handful of sentences in the New Testament command Christians to 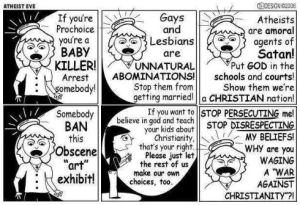 proselytize (which can produce some very bad behavior in the service of this perceived greater good). For Evangelicals this is considered one of the most important commandments in the Bible. It is called “The Great Commission.”

As a way to prevent missionaries and other enthusiastic “witnesses” from taking negative feedback to heart, the Bible and Christian tradition specifically predict persecution as a response to evangelism. Consequently, almost nothing brings out Christianity’s multi-millennial persecution complex more readily than thwarted evangelism:

Go into all the world and preach the gospel to all creation. Mark 16:15

Therefore go and make disciples of all nations, baptizing them in the name of the Father and of the Son and of the Holy Spirit, and teaching them to obey everything I have commanded you. Matthew 28:18-20

I am sending you out like sheep among wolves. Therefore be as shrewd as snakes and as innocent as doves. Be on your guard; you will be handed over to the local councils and be flogged in the synagogues. Matthew 10:16-17

Australia Sees Through It

A man like Troy Newman, convinced that he is on a righteous mission—convinced that he speaks for God and God speaks through him—has no hope of seeing obstruction for what it is, a rejection of his own ugly verbiage and behavior by more clear-headed people whose morality is based, not in blind belief, but in a thoughtful commitment to wellbeing. What Newman is up against is not persecution, but Australia’s commitment to the wellbeing of her healthcare providers and couples who are trying to make wise intentional decisions about their families. That may make him feel persecuted, but it makes many of the rest of us feel grateful that, in Australia at least, someone is minding the shop.

Seattle psychologist and writer. Author - Trusting Doubt; Deas and Other Imaginings.
View all posts by Valerie Tarico →
This entry was posted in Christianity in the Public Square and tagged abortion, Center for Medical Progress, Christian persecution complex, Operation Rescue. Bookmark the permalink.