Beyond Homophobia: The Even Bigger Reason to Avoid World Vision 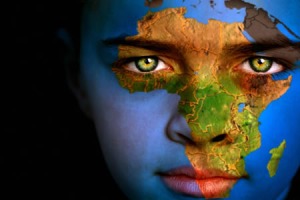 In a media frenzy akin to the Komen scandal, Evangelical aid organization World Vision (annual budget one billion plus)announced recently that it would allow legally married and monogamous queer Christians on its payroll. Conservative co-religionists, including Franklin Graham of Billy Graham Ministries, and Russell Moore of the Southern Baptist Convention took to the media denouncing the decision as a violation of biblical Christianity and all that is good. Thousands of Evangelicals withdrew their support from desperately poor children around the world, over $800,000 in all. 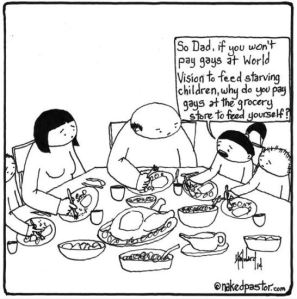 To compensate, moderate people of faith solicited donations. But then World Vision caved and reinstated its old employee conduct rules which require a commitment of abstinence for all but married straights. Questions abound: Will Evangelicals who withdrew their support return? Will the new pledges stick? (World Vision U.S. has offered to refund them, and World Vision Canada has issued assurances that it abides by Canada’s anti-discrimination laws.) How will the controversy affect World Vision coffers, grantees, and partner relationships in the long run?

One irreversible effect of the controversy is that World Vision is now out to the general public as a “para-church” entity, bound to biblical literalism and a derivative set of theological orthodoxies. When disaster strikes, World Vision solicitations rarely call attention to the Evangelical beliefs that are baked into its organizational structure. Consequently, some would be donors think they are giving to either a secular organization like Save the Children or one with distant Christian roots like the Red Cross.

The reality is that World Vision is committed to their Evangelical worldview. In 2011, World Vision fought all the way to the Supreme Court of the United States and won the right to fire warehouse workers and support staff who didn’t believe in the trinity or the unique deity of Jesus.  In seeking exemption from anti-discrimination laws, attorneys for World Vision argued that the organization couldn’t fulfill its Christian mission if such internal theological differences were allowed.

This argument may seem patently specious. After all, in order to secure hundreds of millions annually in taxpayer funding World Vision has said repeatedly that the organization does not proselytize, and a liberal Christian or even a godforsaking atheist can pack medical supplies into a box as well as an Evangelical can.

But does World Vision really provide aid without a side-serving of evangelism? Their website and contents of a recent World Vision Christmas catalog would suggest otherwise. The catalog included Bibles in a child’s own language as one of the items that donors can purchase for aid recipients, along with soccer balls and musical instruments: “Share the meaning and message of Christmas,” the print exhorted. “It will mean more than you can imagine for a child who is eager to have a Bible in his or her own language. What a wonderful way to show a boy or girl God’s love.” In 2012 alone, World Vision claims to have made available 1,296,038 Bibles and New Testaments.

Keep in mind that the targets of such giving include kids who may own no other books. Soccer balls, school supplies, food and Bibles add up to a pretty persuasive argument for considering Christianity. As their website puts it, “In all ways appropriate for a local context, we seek to witness to Christ — through our deeds of love and mercy, the character and conduct of our staff, and through our words of testimony.”

One place World Vision partners with local churches and works on “child witness” is Uganda, where the influence of American Evangelicals has led to legislation that prescribes a life sentence for homosexual behavior. The bottom line is that no-one should be supporting World Vision who doesn’t hold Evangelical beliefs and desire to win souls for Jesus.

But there is an even bigger reason that donors, including thoughtful compassionate Evangelicals, should think about sending their donations elsewhere.

World Vision got its start by encouraging Americans to sponsor individual children in developing countries. It has since grown into a multi-national organization and a major conduit for public aid dollars, but child sponsorship continues to be a key revenue stream. World Vision’s website features a foreign child’s picture and name and touts “blessings of sponsorship”—including opportunities, send cards and letters, email the child, give special gifts and packages, or even visit. 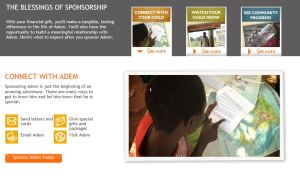 As an Evangelical college student I sponsored a young boy in India, sending a few dollars monthly for school supplies and, in return, receiving personal updates—until I one day received an update from World Vision headquarters replacing my child with another. I was offended that, after cultivating a heartstrings relationship, my child had been deemed replaceable. I had no way to continue supporting him independently, so I took my sparse charity dollars elsewhere. Heaven only knows what he thought.

It was not until I was a graduate student studying family systems that I realized that the whole concept of child sponsorship is flawed to the core.

Imagine that you are a poor parent, struggling to take care of your children as best you can. You are trying desperately to make sure that they are fed, clothed and educated. You may have no toilet and only two sets of clothing, but you are toiling to create a secure, loving home, with dignity and respect and a sense of the values that are sacred to you and your extended family. You love doing little things that make your children happy like providing the small treats and gifts that tell them they are special. But you simply can’t make ends meet.

An option is available to you. A foreign sugar daddy who earns more in a week than you can earn in a year is willing to help out one of your children—but only if the dollars go directly to your child, and only if the sugar daddy gets to share his or her culture and values with your child without ever even meeting you. The sugar daddy will become the one who gives those little gifts. If you are lucky, your child may get to go to a school funded by a whole group of similar sugar daddies, a school with real paper and pencils and books that your public school can’t afford. (If you are unlucky, the sugar-daddy school may also teach your child that your ancestral gods are demons and that you’re going to be tortured forever in hell.)

Sponsorship reeks of colonialism, pure and simple—privileged, mostly white people using their position to manipulate poor brown people, with callous disregard to how much familial or cultural disruption it may cause. Sponsorship programs ensure that children get their material needs met and sponsors get to feel good while parents and extended families are undermined and humiliated. How would sponsors feel if the roles were reversed?

We have better options, options that promote family dignity and parent-child bonds. For example, organizations like World Vision and Save the Children that now promote child sponsorship could switch instead to family sponsorship. Any communication would then be parent to parent or family to family, as would the flow of funds. Para-church organizations that seek to be aid providers (rather than just missionaries) might limit religiously themed gifts and “spiritual nurturance” conversations to families who already share their same religion. (Even still, one might question whether adding tax dollars to this equation is appropriate. To their credit, World Vision has been evolving a more multifaceted service model.) One requirement for sponsorship should be that the sponsor receive some minimal education about wealth and power differentials and how unequal relationships create risk for manipulation or exploitation.

But even family-to-family sponsorships can be disruptive at the community level because dependencies are fostered and inequalities exaggerated. (Stories here, here.) Well-intentioned governmental and nongovernmental aid programs have made this kind of mistake and many have worked to develop more effective models for pulling families out of poverty. 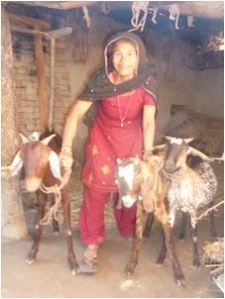 Thoughtful microfinance programs like ProMujer offer loans and information directly to mothers, empowering financial security through work and mutual support. (Many options can be found at Kiva.org, where the loan can be as little as $25.) Social venture organizations like Upaya,–the name in Sanskrit means “skillful means”—take the sophistication one step further. They provide seed money known as pioneer capital to help innovators to create jobs for the ultra-poor in their own villages.

Mechanisms like these create dignity, allowing men and women at the bottom of the economic pyramid to pull themselves and their families up. They provide a hand up to an adult or even a community, not a hand out to a child. They may not offer donors the same heartstring tug I once received from the small sweet brown child on a sponsorship letter. But should they? Before clicking the “give now” button, those of us who have been blessed with bounty enough to share need to ask ourselves a tough question:

Is the point of generosity to feel good or to do good?

Valerie Tarico is a psychologist and writer in Seattle, Washington. She is the author of Trusting Doubt: A Former Evangelical Looks at Old Beliefs in a New Light and Deas and Other Imaginings, and the founder of www.WisdomCommons.org. Subscribe to her articles at Awaypoint.Wordpress.com.

Seattle psychologist and writer. Author - Trusting Doubt; Deas and Other Imaginings.
View all posts by Valerie Tarico →
This entry was posted in Uncategorized. Bookmark the permalink.

3 Responses to Beyond Homophobia: The Even Bigger Reason to Avoid World Vision