The Making of an Anti-Theist Mom 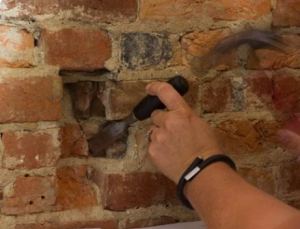 What makes a Seattle mother spend her days trying to chip away at Bible belief rather than digging holes in the garden?

When my husband sent me the Pew Report news that the percent of Americans who call themselves Christian has dropped from 78.4 to 70.6 over the last 7 years, I responded jokingly with six words: You’re welcome. Molly Moon’s after dinner?

Not that I actually claim credit for the decline. As they say, it takes a village. But I have been busting my butt for a decade now—working as hard and smart as I know how—to undermine the corrosive influence of a weaponized Bible on communities and people I love. So I’d like to pretend that the poll results mean I deserve ice cream.

If the past is any indicator, conservative Christian commentators will go batshit over the Pew numbers, citing them as proof positive that Christianity is under siege, that the hordes of darkness have broken through the gates of Hell.  Only by electing Ted Cruz or Bobby Jindal to the White House can True Christians restore America to her [fictional] glory days in which every red blooded American went to church in his or her Sunday best and there was prayer in every school and children behaved because they got hit and the Earth was 6000 years old by fiat.

The predictable frenzy of doomsaying is likely to ignore two rather obvious facts:

Satan’s not the problem.

So, if fundamentalists are running their own anti-marketing campaign, why does someone like me spend half of each week in front of a computer writing, unpaid, on topics like twelve really bad religious ideas that have made the world worse or why the Christian heaven would actually be hell or the common root of religious child abuse and the pro-life movement?

Evangelicals of the sort I used to be might say Because of Satan. Obviously. Or they might say that I hate the God that I no longer believe in.

I don’t hate God. You know what I do hate? People acting like douches.

When the Christian Coalition decided in the 1990s to take over America’s political system and impose their moral and spiritual values top down, some outsiders felt offended because, believe it or not, we actually have deeply held values of our own. When Evangelicals realized in the 2000s that they could get taxpayers to subsidize evangelism via public contracts and “faith based initiatives,” things got worse. And then when a whole Pandora’s box of hobby lobbyists discovered that by claiming “religious freedom” they could get excused from rules and responsibilities that otherwise apply to all. . . well here’s where we’re at.

From Incredulity to Activism

Losing my religion didn’t make me an anti-theist.

I left Christianity more than twenty years ago, when I got tired of making excuses for the God I had worshipped since childhood and then realized there was little left of my God but those shabby, worn out excuses. At the time, I was working on a children’s cancer ward. Enough said.

But when I stopped believing, I didn’t go public, let alone go activist; I simply moved on.

Some people’s journey out of their religion leaves them wounded or traumatized, but at the end my own departure was pretty painless. I had a great community of secular friends, and my Evangelical relatives were and are loving to this day, even those who think I’m slated for eternal torture.

I did and still do find spiritual kin among people whose call themselves Christian. I was honored to sit on the board of the Washington Association of Churches as a bridge builder, a non-theist who nonetheless believed in the mission statement they had drawn from the words of the prophet Micah: to do justice, love mercy, and walk humbly. Years later, I worked together with a broad coalition to create an “Interspiritual Day” during a week of events called Seeds of Compassion that brought the Dalai Lama and Desmond Tutu to Seattle for conversations with business leaders, educators, religious leaders and ordinary citizens.

To be clear, I have never, since that time on the cancer ward, ascribed to any sort of supernaturalism, no matter how soft and kind. I have never thought that What- the-Bleep-type mysticism was anything other than woo. But at some point I realized that my own version of secular spirituality wasn’t about beliefs. It was about who and how I served, and there were people who shared that center point across the spectrum of religious belief and disbelief.

After the last vapors of my Evangelical faith evaporated into the cancer ward at Children’s Hospital, religion simply faded from my life. In my naïve narcissism, I assumed that since the Bible God had stopped making sense to me, everyone else was probably drifting in the same direction and I could just get on with the business of working and loving and making sweet babies.

More personally painful was the realization that my otherwise kind, decent Evangelical relatives found G.W.’s willful ignorance of foreign policy a matter of indifference. The fact that his gesture to the Big Man in the Sky before invading Iraq actually satisfied them became a pivotal sore point. If religious belief could make good people like them intellectually sloppy and casually cruel, something needed doing. And I’ve been working ever since at doing it.

Look. Nobody wants to have to take on the Vatican or the Southern Baptist Convention or ISIS in order to have there be a little more kindness in the world and a little less pain. Most outside critics of Christianity fully grasp that their quest is Quixotic. Picture me, a stubby, middle-aged Seattle mom wearing an REI fleece with campfire-burn-holes, pounding small rocks against a walled city that has endured for two thousand years. It’s so inane as to be embarrassing.

I really would rather dig holes in the garden.

But if I care about what I say I care about and love who I say I love; if I truly believe that each of us gets one precious life, and that together we get one precious planet, and that biblical Christianity utterly fails at stewarding either, I feel like I have no choice but to keep pounding.

Do you know anyone who cherishes the Christian tradition and would like to see it reformed and revitalized rather than beaten back? If so, please tell them this: Ideologues who care more about law than love, who get more charged up about injury to biblical authority than injury to a fellow creature, who think that harms done in the name of Christ are somehow lesser evils—believers like this are a far greater threat to Christianity than outside critics ever could be. They also provide the inspiration that keeps folks like me at it:

Why should anyone care about my evolution from Christian to critic? Not because it is important but because it is illustrative. The marriage of biblical Christianity with Right wing politics has cost the Church more than a few Seattle moms.

In October 2014, sociologists Michael Hout and Claude Fischer published an analysis of declining religious affiliation between 1987 and 2012. Their most counterintuitive finding was that political conflict over social issues like non-marital sex and gay marriage caused almost half of the change. Women are hit hardest by conservative policies that block reproductive rights and prioritize the free market over flourishing families, and nonbelief is growing faster among women than men. According to a new report by Christian pollster, Barna: “In 1993 only 16 percent of atheists and agnostics were women. By 2013 that figure had nearly tripled to 43 percent.”

In the words of David Kinneman, president of Barna and author of the book, UnChristian, “This study points out a sobering possibility: that the perception so many young people have of Christians contains more than a kernel of truth.” In separate research he found that only 15 percent of young non-Christians thought that the believers they knew were different in a positive way.

The Price of Political Success

On one level, the culture wars have been a smashing success for conservative Evangelicals and Bible believers. Republican Presidential contenders are tripping over themselves in their haste to position as devout Christians and defenders of religious freedom. An Indiana woman recently received a twenty-year sentence for self-aborting her secret pregnancy. The Texas Board of Education endorsed Moses as one of America’s founding fathers. Religious organizations have unprecedented rights to government contracts and the use of public facilities for expressly religious purposes. The Supreme Court has given the thumbs up to religious exemptions from laws and duties that otherwise apply to all Americans.

But one can’t help but wonder if, in the long run, Christians will look back and regret the seduction of political power. Nineteen percent of adults are former Christians, and resources for ex-Christians or believers “in recovery” are mushrooming. And among the youngest adults, thirty-four percent don’t affiliate with any specific church or religion, up from twenty-five percent in 2007.

As Christianity loses moderate believers, those who remain appear increasingly narrow minded and dogmatic. No less a figure than the Pope has called rigid ideology an “illness” within the Church, one that drives people away:

“The faith passes, so to speak, through a distiller and becomes ideology. And ideology does not beckon [people]. In ideologies there is not Jesus: his tenderness, his love, his meekness. . . . Ideology frightens, ideology chases away.”

Rigid and judgmental ideology chases away young people in particular. But it also turns former Christians like me into writers and speakers who are intent on exposing ugly realities that religious institutions might prefer to downplay. The illness within the Church, as Pope Francis called it, demands that I keep writing and talking because—for the life of me—I can’t figure out how we can move toward a better future, one grounded more deeply in compassion, inclusion and discovery, when the world’s supermajority religions are anchored to the Iron Age by rigid book worship, sick with ideology and aspirations of political dominion.

Can reformers within Christianity reclaim their spiritual tradition from the Pharisees and political operatives and bring it forward? Can they articulate a Christian worldview that puts love over law and is compatible with what we know about ourselves and the world around us? Certainly some are trying. Rob Bell, for example, and Rachel Held Evans. Fred Plumer. Anglican Bishop John Shelby Spong. Maybe, possibly, even Pope Francis himself.

I have no idea if they will succeed. In the meantime, I intend to be here at my desk criticizing fundamentalism, extoling doubt and awaiting my next excuse for Molly Moon’s melted chocolate.

Seattle psychologist and writer. Author - Trusting Doubt; Deas and Other Imaginings.
View all posts by Valerie Tarico →
This entry was posted in Christianity in the Public Square and tagged anti-theism, atheism, nonbelief. Bookmark the permalink.

31 Responses to The Making of an Anti-Theist Mom