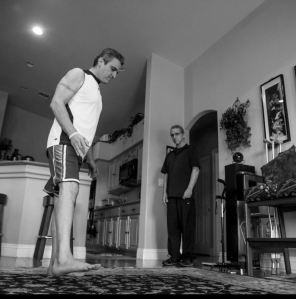 If yoga helps a Christian man to walk for the first time in thirty-three years, does his newfound strength come from God or the Devil? That is the question tearing apart an Evangelical church in Las Vegas.

In the New Testament gospel of Mark, Jesus tells a paralytic man to take up his bed and walk, and he does. In the Acts of the Apostles, Peter calls on the name of Jesus and does the same for a man who has been lame since birth:

Peter said, “I have no silver or gold, but what I have I give you; in the name of Jesus Christ of Nazareth, stand up and walk.” And he took him by the right hand and raised him up; and immediately his feet and ankles were made strong. Jumping up, he stood and began to walk, and he entered the temple with them, walking and leaping and praising God. (Acts 3:6-8NRSV)

So, when John Taylor prayed earnestly that a similar miracle might befall his fellow church member, Mike Persi, he prayed in faith, believing, and then waited. Mike had been wheelchair bound for over three decades, ever since an accident at age 27 left him unable to walk or to speak without stuttering.

The odds were long against Mike getting back on his feet. But one week later, an acquaintance who didn’t know about the prayer sent John’s wife a video in which a man with similar injuries regained his ability to walk through intensive yoga therapy. John took it as a sign. So did Mike. So did born-again Christian yoga instructor, Mitch Menik, who even offered to take Mike into his own home during a course of intensive treatment.

When Mike took his first wobbly but unassisted steps, all involved were thrilled and thanked God for a miracle that to their minds was modeled on the ministry of Jesus. But not everyone in Mike and John’s Abundant Living Las Vegas congregation felt the same. When friends set up a GoFundMe page to help Mitch cover income lost during the time he was working with Mike, most parishioners refused to contribute. And when Abundant Living’s pastor blessed the therapy, members (and money) poured out of the church.

Many biblical literalists, and charismatic or Pentecostal Christians in particular, are deeply suspicious of yoga, which they see less as a healing or wellness practice and more as a seductive point of entry into the Hindu religion. Open inquiring forms of Christianity may teach that “all truth is God’s truth,” or even that there are many paths to God, and even Evangelicals who take a narrower view of Christianity may see yoga as beneficial. But a more common posture among conservative biblical literalists is wariness and suspicion, or outright condemnation. One Christian website, Christian Apologetics and Research Ministry, quotes from Yoga Journal and then adds their own commentary:

According to Pentecostal and related theologies, all around us invisible supernatural powers are waging a cosmic war between good and evil, with the literal forces of Satan aligned against the host of God. As this battle plays out, each of us is on one side or the other, and only great vigilance can prevent Christians from being seduced by false prophets or demonic powers.

In this view, the Hindu gods are literally demons, which makes spiritual pluralism dangerous and bad. In India, Hindu villagers have voiced outrage when children come home from missionary schools—sometimes the only schools around with books and paper—frightened because teachers have said that their parents and aunts and uncles worship evil demons. As harmful as this might be to parent-child relationships, the missionaries genuinely believe they are doing the right thing.

In the words of Pat Robertson, “Hinduism and many of the occult activities that come out of the Orient are inspired by demons and demon worship…There’s this concept that all religions are the same and all are good. That is not true. The worship of the Devil is not good.” Yoga, like séances and Ouija boards, can create small cracks in your spiritual defenses through with a demon can take possession of your soul.

This is the kind of fear-based Christianity that boycotted Harry Potter movies and seeks to keep fantasy books out of children’s libraries. That is because this worldview takes the idea of sorcery quite seriously. Human development consultant Marlene Winell coined the term Religious Trauma Syndrome to describe the experience of many who have been wounded by authoritarian, fear-based forms of faith. Winell was raised by Pentecostal Assemblies of God missionaries, and lays out the Pentecostal worldview succinctly, along with psychological harms it can cause.

This month, Mike Shreve ministries, an outspoken opponent of yoga will host a faith healing conference in Tennessee featuring “seasoned minister of the Gospel” Richard Madison who “was literally ‘raised from the dead,’ confirmed by a medical technician.” In rural Africa, far from modern medical science, unaccountable American missionaries from Pentecostal denominations host faith healing rallies and frequently claim miraculous cures that include raising the dead.

In a world filled with magic and peopled with unseen powers, not unlike the Iron Age context of the Bible writers, it only makes sense to be wary of miracle cures from suspect sources (who may be viewed as competitors as well as practitioners of the dark arts).

From where Mitch Menik sits, there’s nothing demonic about the fact that Mike can now walk across a room unassisted, although he too gives thanks to God for the miracle. The accomplishment has been attained through a rigorous course of exercise that taps inner strength to build outer strength. The regime draws on not only Yoga but Tai Chi, Ki Gong, and a diet of nutrient rich home-cooked meals provided by Mitch’s partner, Than. Mike has come this far not only by the grace of God but by setting small, incremental goals and then working to beat each milestone. As of Monday, May 11, his record was 274 steps total, including 65 in a row without assistance.

Don’t Take No for an Answer

The pastor of Abundant Living Las Vegas, Bob Perry, holds a literalist view of the Bible. But he believes that God works through many channels, and he sees the hand of God in Mitch and Than’s generosity. When Mike first approached him with questions about yoga, Bob advised him “to pray, to hear from God, and to be led by peace.” And as painful as the rifts within the church may be, he has stood by Mike. He appears to hold no rancor toward those who have left the church over his support for Mike, saying simply that “They are well-meaning people who have listened to myths and wrong teachings of the Bible.”

As for himself, Perry says, “I’m not going to stand in the way or limit how God speaks to people. In the Bible, God speaks through a donkey!”

“Some people wanted me to condemn Mike’s yoga. But I’m not the one to judge,” he adds. “My job is to teach people how to search for God, not to step in and be God for them. I think it would really help if people tried to have a relationship with God rather than trying to be God. If Mike is at peace, then I am with him.”

On Mother’s Day, Perry preached about Matthew’s story in which a gentile mother comes to Jesus seeking healing for her daughter. At first, Jesus turns her away, saying that his ministry is to the house of Israel. But she keeps asking, and he relents. Perry interprets the story for his congregation: “The real message of this story is the tenacity of this mother’s faith. Don’t take no for an answer even if the no comes from Jesus. . . . Faith stays after it, even in the face of adversity.” Is Perry’s sermon an affirmation of Mike and Mitch’s remarkable feat or an exhortation to himself and the remaining members of his congregation? Perhaps both.

As Mike moves forward, one step, one day at a time, his legs are building muscle. They now look like the legs of a man who walks, not one who has been in atrophy for three decades. Whether one attributes that to the hand of God or the miracle of human kindness and generosity, it is a source of wonder, delight, and gratitude to all who have kept the faith. “Mitch is an angel,” Mike says. “I can’t believe it’s happening.”

I asked him–did he cry when he took those first wobbly steps? “No,” he responded. “I didn’t cry. But there were tears running out of my eyes and down my cheeks.”

On May 24, Mike hopes to walk into church on his own two legs, with his friends at his side, for the first time in thirty years. He is so proud and grateful that he’s hoping the whole Las Vegas news community turns out to record the event.

_________
Valerie Tarico is a psychologist and writer in Seattle, Washington. She is the author of Trusting Doubt: A Former Evangelical Looks at Old Beliefs in a New Light and Deas and Other Imaginings, and the founder of www.WisdomCommons.org.  Her articles about religion, reproductive health, and the role of women in society have been featured at sites including AlterNet, Salon, the Huffington Post, Grist, and Jezebel.  Subscribe at ValerieTarico.com.