Can Religion be an Addiction? 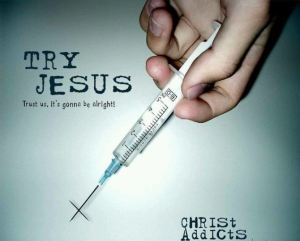 “I’ve never been happier since I quit my 30-year addiction to Jesus.” – Blogger and Christian Heretic Sandra Kee

To a medical researcher, the word addiction has a specific biological meaning. But in common vernacular, it means approximately this: the state of being enslaved to a habit or practice or to something that is psychologically or physically habit-forming, such as narcotics, to such an extent that its cessation causes severe trauma.

Based on this definition some religious experiences seem a lot like addictions—at least that’s what former believers say.

Blogger Sandra Kee, a self-described “Christian Heretic,” looks back at her family history and sees religion and addiction as a messy tangle: “My family for several generations was in a dysfunctional and addictive religious life, using God (or what we believed about God) as a drug. Many of the family who left religion simply traded for another addiction. The generations that entered into religion did so to escape alcoholism and other addictions (though it wasn’t called addiction back then). Many who remained in religion developed additional addictions as well.”

Former Mormon Brandon Olson is even more emphatic: “Karl Marx said it right, ‘Religion is the opiate of the masses.’ I’m still recovering from it. Part of my recovery is helping others get free,” says Olson. “I quit believing in a god when I was a teenager, but I was afraid of hell / damnation until I was about 35. It took me until I was 40 to speak up and revoke my LDS cult membership. I am now 50, and I consider religion to be an imposed addiction – no different than holding a baby and shooting it up with small doses of heroin, increasing the doses as the baby grows.”

In recent decades, the idea of recovery from religion has taken root. Recovery websites provide platforms for sharing stories, like exChristian.net, or offer support and help, like RecoveringfromReligion.org. Many draw on the language and strategies of other recovery programs.

Even within Christianity, some people use 12-Step language to talk about religious addiction or what a newly-released book calls Sober Spirituality. Author Elizabeth Esther describes how church experiences produce a “high”:

There’s the ubiquitous mood lighting so that you can only see what’s meant to be seen… Loud music ensures you hear only what is meant to be heard… Several high-energy warm-up acts make you feel only what you’re supposed to feel… By the time the featured attraction steps on stage… you’re so amped up you’ll hand over your body, soul, and wallet. It doesn’t even occur to you that this might be destructive, because feeling elated is the desired outcome.

The result, says Esther, can be a destructive quest for righteous euphoria. Father Leo Booth similarly uses the language of Alcoholics Anonymous in his book, When God Becomes a Drug, which promises readers “practical ways to overcome excessive devotion and attain healthy spirituality.”

When does spirituality start looking like addiction? On the internet, checklists abound (for example, here, here, and here) and include symptoms that would sound familiar to any addict or Al Anon member.  Here are some highlights:

But religious addiction checklists and other self-help materials often also include symptoms that, while psychologically unhealthy, may have little to do with diagnosing addiction.

Without a doubt, a yes to any of these questions suggests that something is out of whack. Patterns like these can interfere with healthy self-esteem, personal empowerment, work, community service, and loving relationships. They are toxic. That said, a worldview can be toxic without being addictive, which may leave the question of religious addiction murky at best.

Looking back on his years as a Christian, non-theist Tony Debono says “While I have no desire to return to religion, I definitely miss the highs of religious worship, as well as the friendship and support of the community. Is that more like missing a substance of addiction, or like missing the delirium and strange dreams of a high fever? I’m not sure.”

To make matters even more complex, a set of beliefs can be false without being either toxic or addictive, and in some situation false beliefs may even be adaptive. Also, research suggests that participation in some forms of religious community or spiritual practices like meditation may have benefits independent of any truth-value in the community’s distinctive claims.

Recognizing this, humanist and atheist groups have begun experimenting with how to create secular churches and humanist assemblies—communities that lack supernatural beliefs but that nonetheless meet regularly to channel wonder, provide mutual support, talk about deep values, and inspire service. These experimental communities are exploring how to keep some of the best of religion without supernaturalism and without the other parts that can lead religion to feel harmful. In the future, secular spiritual communities of this type may ease the transition for people leaving a religion that feels unhealthy or addictive, or that no longer fits for other reasons.

Your results may vary

The risk of any activity or substance becoming a compulsion depends in part on characteristics of the substance and in part on characteristics of the situation and user. We know, for example, that nicotine is more addictive than marijuana. But for even the most intense pleasures—those that create the highest rates of compulsion—some users retain their capacity for autonomy and balance.

Some people can ingest a pleasurable neurotoxin like alcohol or even cocaine in moderation, while others find themselves drawn inexorably toward self-destruction. The same can be said about pleasurable activities like running or gambling. And the same is likely to be true of powerful religious pleasures—intense feelings of euphoria, transcendence, hope, joy, absolution, security, immortality, certitude, purity, purpose, belonging, or superiority.

In the end, the question of whether religion is addictive for you or someone you care about comes back to the definition of addiction itself, which includes words like enslaved, habit, and trauma: Has your religion consumed your life? Is it freely chosen? (Try on the thought of what might happen if you let it go.) What price are you or others around you paying for the good stuff you get?

Addiction aside, the bigger question may be whether a specific set of religious beliefs or practices contributes to wellbeing or harm. Human development consultant Marlene Winell describes a pattern she calls religious trauma syndrome, which can be triggered either by experiences within religious communities—especially those that are authoritarian, isolationist and fear based—or as a consequence of leaving. Winell’s diagnosis is unofficial, but when she writes on the topic, former believers by the hundreds respond, saying that they see themselves in her words and stories.

A growing array of options

Fortunately, for those who find their former religion to be harmful, addictive or otherwise a bad fit, options in most of the world are growing. It has been said that there are as many gods as there are believers, and some people who shake free from one form of religion find themselves at home in another. But a growing number of former believers, say they are one or another kind of post-religious, and that’s ok. There’s plenty of downside to all of these differences. As Jon Stewart put it sardonically, “Religion. It’s given people hope in a world torn apart by . . . religion.”

But the upside is this: Anyone able to open their door finds a whole world of possibilities just outside.

22 Responses to Can Religion be an Addiction?