A Better Life, the Movie. Atheist Filmmaker Chris Johnson on His New Documentary

What if “no gods, no masters” is simply a starting point?

In 2014, photographer and filmmaker Chris Johnson published A Better Life, a coffee table book that profiles atheists from around the world as they discuss the pursuits and relationships that give their lives joy and meaning. This summer he has released a documentary film based on the same set of interviews with atheists including comedian Julia Sweeney, philosopher A.C. Grayling, climber Alex Honnold, cognitive scientist Daniel Dennett, science journalist Cara Santa Maria, human rights activist Nahla Mahmoud, and more.

“Our public conversation about atheism is two dimensional,” says Johnson. “It’s time to open the next phase. For ten years we’ve talked about what we don’t believe in. The dialogue kicked off by the New Atheist movement was much needed, but after we strip away gods and superstition, what is left? How do we see ourselves and our lives and our relationships? That’s what we need to talk about next.”

Johnson grew up in Seattle, Washington—dubbed the heart of the religious “None Zone,” with an atheist mother and a liberal Christian father; he currently resides in New York. Nonetheless, he is keenly aware of the stereotypes that make atheists one of America’s least electable minorities: male, white, hyper-intellectual, hedonistic, untrustworthy, and living empty lives devoid of purpose and meaning. By contrast with the common image, Johnson’s documentary reveals a diverse tapestry of people who live in “a world without gods.”

In this interview, Johnson discusses why he made the film and how audiences are responding.

Tarico: You started touring A Better Life in May and since have screened the film in cities from London to Lima, and from America’s godless “left coast” to the heart of Texas. How are people responding?

Johnson: It touches a nerve. In San Antonio, a woman came up to me afterwards in tears because the people interviewed in the film talked about meaning and happiness in a way that she hadn’t encountered before. They expressed her own feelings and ideas in a way she hadn’t been able to.

In Peru some people travelled eight hours on a bus to see the film. Peru is one of the most religious countries in the world—97% Catholic—so things like this aren’t talked about very much. We had Spanish subtitles done and the film was featured in national publications there.

Some people were expecting to hear the same thing from everyone—why religion is wrong. But instead, the atheists in the film were talking about really big questions: How do we find meaning and purpose? How do we relate with each other? How do we deal with our own mortality? How do we interact with the world around us? They talked about dimensions of the religious experience that are accessible to people outside of religion. So many people get incredible experiences going to church. But if you assume that all of this is natural, then these powerful experiences have natural causes. So we can ask, how can we have the same rich experiences without the things we don’t like about religion?

Tarico: As you travel around you’re getting glimpses into a variety of atheist communities in different places and cultures. What do you see?

Johnson: A lot depends on the society surrounding these communities. In London, for example, people don’t really care if you are an atheist. That’s very different in Peru or Texas. Atheists in Lima or Houston need more validation because they are pushing against the stigma imposed on them by a religious culture. The movie resonated most where people hold on to religious labels more strongly and so atheists embrace their own label as a way of holding their distinctive identity.

It’s a new thing that atheists are forming communities and I think it’s a good thing. One reason churches are so successful is because they provide spaces for people to come together—so much so that some atheist churches have to use religious spaces because those are the only community gathering places in town. Churches are very successful at getting people to support one other. If we can get that without the false truth claims of religion, we get the best of both worlds.

Tarico: The stereotype, at least here in America, is that without gods and heaven, life is dreary—with no basis for love or morality. That makes your title, A Better Life, rather bold. Even some atheists would say, “Why claim our way is better? It’s all good. Religious people have a right to their own opinions as long as they aren’t imposing them on others or undermining civil society.”

Johnson: I honestly think that if we all were to adopt a more rational, evidence-based view it would be better. Religion makes you worry about things for no reason–the concept of sin, etc. Or like all the money that gets put into opposing same sex marriage–and for what? To stop two consenting adults from being happy? It’s just crazy that people waste so much time on things that don’t affect them. When you strip away all of the unnecessary rules and worries, you can focus more on the things that really do matter in the short time that we have to be alive.

Tarico: People would not be surprised that you, and the folks you interview, promote rationality, but some might be surprised at the moral or even spiritual dimension to some of the conversations. What comes across in the interviews is a deep sense of purpose, a strong ethical structure.

Johnson: I’m glad that comes across. People think that to have profound meaningful experiences and commitments takes religion or some higher power outside of yourself. But it doesn’t.

In fact, an evidence-based rational perspective can make you more understanding and compassionate. The naturalist worldview recognizes many complex causes and effects in people’s lives and that can lead to compassion. If you look at the bishop in Les Miserables who lies and saves Jean Valjean from going back to prison, that is an act of grace—an act of compassion. This idea of grace, the idea of undeserved forgiveness—we tend to think of that in a religious sense. But if you look at the world as purely natural, then you could be inclined to think of that in the same sense. I’m an atheist and the story of Les Miserables resonates with me in the same way it does with many believers. The ideas of compassion and forgiveness are universally human and not strictly religious.

The other way that a naturalistic worldview can make us more compassionate and caring is the recognition that it’s up to us. To me, the world looks as if there is no-one pulling the strings. If you were to imagine what would a world look like with no gods, good things would happen to bad people and bad to good, and there would be pain and suffering, and things would happen arbitrarily from a moral standpoint. That seems to be the world we live in.

If there is no god pulling the strings, then all that is left is the world and the people around us.

Tarico: In Letting Go of God, Julia Sweeney described getting hit by a similar realization when she tried on the idea that there is no god. She’s so awesome that I have to quote her: “’Wait a minute. What about those people who are like…unjustifiably jailed somewhere horrible, and they are like…in solitary confinement and all they do is pray…this means that I…like I think they’re praying to nobody? Is that possible?’ And then I thought, ’We gotta do something to get those people outta jail!’ Because no one else is looking out for them but us; no God is hearing their pleas. And I guess that goes for really poor people too or really oppressed people who—I had this vague notion—they had God to comfort them. And an even vaguer idea, that God had orchestrated their lot for some unknowable grand design. I wandered around in a daze thinking, ’No one is minding the store!’”

Johnson: Yes! If there is no external presence in our lives, it’s just you and the people around you. It’s just all of us together. It forces us to look inward to ourselves and each other for strength, support, compassion, love, community. All of the things that people think they get from gods we can get from each other. These other people actually exist and can manifest in your life and help you and you can do the same for them.

Tarico: Have there been any surprises along the way since you started touring the film?

Johnson: I’d say that the film has impacted my own life in a way that I wasn’t expecting. Julia Sweeney—who is in the film, by the way—talks about dwelling on the happiest moments in your life, not just reminiscing afterwards but as they are happening, because in the end that is all you have. I found myself being more mindful of moments in which I am happy—taking the time to think this is a happy moment and savoring that. It makes me remember it even more because I made a mental note of it.

One night I was on a bus in Peru, up near Cuzco. I looked out the window at a sky full of stars that I had never seen before, the stars of the southern hemisphere. In the film, A.C. Grayling talks about growing up in Africa—how bright those stars were and being able to read by starlight. So there I was in Peru, on this bus, and linking it back to the Africa of Grayling’s childhood.

Tarico: What is your big hope for this film, your piece of art?

Johnson: I like to sum up the film in a single line: There is no god—now what?

People gravitate toward religion because it deals with the big questions in life. How do we deal with death, life, love, the world around us and the people around us?

We have receptors for these questions, and religion has found a way to latch on to those. Letting go of religion creates an opening and unless people can fill that void it will fill back up with superstition. The opposite of religious thinking isn’t “nothing.” So we need to take the next step. Hopefully by engaging these questions in a naturalistic way, we become less susceptible to old answers that have harmful baggage attached. Yes, there are difficult realities, but we can discuss them in ways that don’t involve making things up. 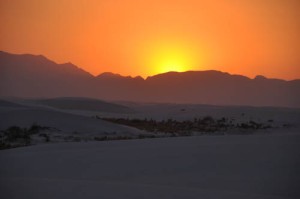 ohnson: Just this: You don’t get much time. AC Grayling in the film talks about the fact that each of us gets less than 1000 months to live. A third of that you’re asleep, another third you’re waiting in line somewhere, so you have 300 months to do what is really important to you. Letting go of gods is just a starting point. A better life means embracing our sense of awe and wonder, our place in the universe and creating a new understanding of our most profound experiences—whether that is a glimpse of the night sky or an intimate relationship.

Seattle psychologist and writer. Author - Trusting Doubt; Deas and Other Imaginings.
View all posts by Valerie Tarico →
This entry was posted in Musings & Rants: Christianity and tagged atheism, inspiration. Bookmark the permalink.

23 Responses to A Better Life, the Movie. Atheist Filmmaker Chris Johnson on His New Documentary