What do conservative politicians want even more than balanced budgets or an end to abortion?

When Republicans in Colorado pulled the plug on America’s most successful teen pregnancy prevention program, they told the world something about themselves and their political kin: Conservatives may talk about ending abortion or balancing state budgets, but there’s something they want more. This point has been underscored by the latest spliced-video smear campaign against Planned Parenthood that, if successful, will defund every service Planned Parenthood provides except abortion.

So what are conservatives really after?

Across the web, in words that range from thoughtful analysis to conspiracy theory to snark, commenters have offered up their hypotheses. Decide for yourself which make the most sense

1. Republicans want to create a labor oversupply and drive down wages. 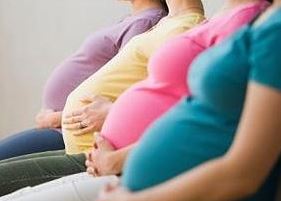 The idea here is that increasing the number of wage-hungry people at the bottom of the economic pyramid serves the interests of the wealthy because it changes the value of labor relative to capital. Although fiscal conservatives complain about welfare, the financial advantages of more births to poor women outweigh the costs. More workers desperate for jobs means corporations can negotiate wages and benefits more aggressively. If you don’t take it, somebody else will.

2. Opposition to birth control is driven by racism or the desire to preserve white Christian privilege. Republican opposition to family planning hits poor minority women the hardest because middle- and upper-class women can usually get the information and care they need. This means Republican policies disproportionately drive up abortions and births among poor women who are often young, immigrants, and racial minorities. Even so, some commenters argue that Republican opposition to contraception is 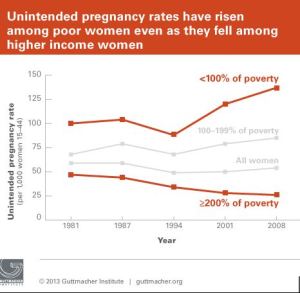 racially motivated. They may have a point: For example, Jerry Boykin of the fundamentalist Christian Family Research Council has urged “red-blooded patriotic” Americans to have more babies so they can outbreed Muslims. Commenters who see racism as a core motivation fall into two camps: those who argue that white Christian men are trying to drive up the birthrate of white Christian women, as in the Duggar quiverfull movement, and those who argue that denying women of color control over their fertility is a way to keep minorities poor and disempowered.

3. For religious conservatives, controlling women trumps other social priorities. In this view, conservative Republicans would actually prefer not to be increasing the number of poor people (or racial minorities) in America, but their determination to maintain traditional gender roles trumps all. If

4. Conservative Christians are hung up on sex and think that young people who break their sex rules should be punished with STIs and babies. In this view, conservatives think people who fool around get what they deserve—especially women. Universal access to better birth control (including abortion) would turn America into a 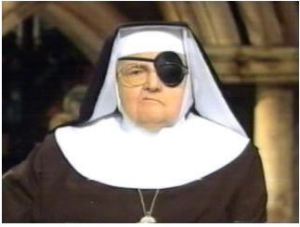 cesspool of hormones run amok. Without straight Christian men making the rules, queers would be perverting children, hypersexual Blacks and Hispanics would be raping women, prime virgin females would become licked lollypops, and 11-year-olds would behave like bunnies. The country would become a wild rumpus of sex without consequences!

Sex columnist Dan Savage is the most prominent spokesperson for this theory:

It’s sex for pleasure that they hate. They hate that kind of sex more than they hate abortion, teen moms, and welfare spending combined. Knowing that some people are having sex for pleasure without having their futures disrupted by an unplanned pregnancy or having their health compromised by a sexually transmitted infection or having to run through a traumatizing gauntlet of shrieking “sidewalk counselors” to get to an abortion clinic keeps them up at night.

A chorus of commenters agree with Savage.

5. Because the Bible. Some folks point to Bible-belief as the root problem, causing both the Christian Right’s fanatical desire to impose an Iron-Age gender script on society, and the Christian Right’s insistence that non-procreative sex is sinful. In this view, a woman managing her fertility (or a man “spilling his seed”) violates natural law. The Catholic

Catechism puts it bluntly: “Lust is disordered desire for or inordinate enjoyment of sexual pleasure. Sexual pleasure is morally disordered when sought for itself, isolated from its procreative and unitive purposes.” Christians holding this view are stuck opposing contraception even if, by doing so, they drive up the abortion rate.

6. Religious conservatives design policies for their ideal world rather than the one we live in. In the world that many conservatives believe was prescribed by God, teens wouldn’t have sex before marriage; nobody would have singles sex or extramarital sex; wise fathers would give their virgin daughters in marriage to godly men; married

couples would always be receptive to pregnancy and able to care for however many children God gives them; and everyone would be straight and cisgender.

Conservative policymakers either try to force this world into existence or else behave as if it already existed. But critics say that this kind of idealism blinds well-meaning conservatives to the fact that, in the real world, their policies promote something very different from stable partnerships and flourishing families.

If none of these theories does it for you, never fear. They are only the most popular hypotheses from a longer list. Maybe you fall into one of these camps:
–The goal is simply to keep the culture wars going for political gain.
–They’ve dug themselves into an anti-government hole and can’t get out of it.
–They wouldn’t know what to do with themselves otherwise.
–The incessant focus on other people’s sex lives is titillating.

Or maybe you have a theory of your own?