By Nate Silver’s calculation, today’s Supreme Court is the most conservative in modern history. Six of nine justices are Catholic. The Chamber of Commerce is winning over 80% of cases.  Do working women who want contraceptive access stand a chance in hell? 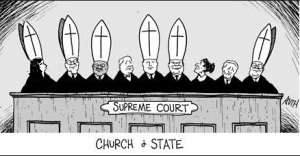 Freshway Foods is a secular, for-profit corporation that distributes produce, but when a Freshway delivery truck shows up, it may carry a bonus: an anti-abortion message from its Catholic founders and owners.  Not surprisingly, those same owners strongly oppose the contraceptive mandate in the Affordable Care Act, so much so that they enlisted Pat Robertson’s American Center for Law and Justice and filed suit, claiming that the mandate violates Freshway’s freedom of religion. Freshway’s attorneys argued, essentially, that businesses have conscience rights which trump the religious freedom of individual employees–a claim the courts have long rejected–so it was dismaying to some religious freedom advocates that on November 1, the DC Circuit Court ruled in their favor.

By contrast with the DC Circuit decision in the Freshway case, the Third Circuit Court ruled the opposite direction, against cabinet manufacturer Conestoga Woods, saying that a corporation doesn’t have a religious conscience. The arguments in the lawsuits were substantially similar, which means that the differences in judgments are due primarily to the makeup of the courts themselves. On November 26, the Supreme Court agreed to hear two cases, Hobby Lobby and Conestoga Wood and decide the question. The result of the Supreme Court decision will have wide ranging effects for American corporations and families, and the outcome is far from certain.

To date, over fifty lawsuits have been filed against the Affordable Care Act by conservative religious business owners. Some of the better known among these are Freshway, Conestoga Woods, Eden Foods, and Hobby Lobby.  Each claims that a corporation should be exempt from offering preventive care insurance that covers family planning, arguing that a mandate to provide comprehensive coverage violates religious freedom.

These cases bring together two big debates that are going on in our country. One is the battle over corporate personhood. How much should businesses be able to claim the same rights that have been secured over the last 200 years for natural persons?  The second is a battle that some have called “conscience creep.” How much should religious organizations and individuals get to be exempt from civil rights and human rights laws and civic duties that otherwise apply to everyone?

David Gans of the Constitutional Accountability Center says that decisions like Sebelius vs Hobby Lobby are a radical expansion of the legal principles that have surrounded religious freedom since America’s founding:

In an issue brief on the topic, Gans quotes from the courts themselves to make his case:

To summarize the argument, what is at stake here is the difference between a thinking, feeling person who is capable of reverence, compassion, love or guilt–and an artificial entity created to make economic activity more efficient. Put that way, the distinction sounds simple, and it seems blindingly obvious that religious conscience is a quality of the former but not the latter.

However, the trend lines for both of the factors mentioned earlier, corporate personhood and conscience creep are heading in the opposite direction. The Citizens United case was just the latest in a series that has given increasing rights to corporations. Similarly, religious institutions and individuals have been seeking and winning a growing range of exemptions from human rights laws, civil rights laws, and civic duties.  Both of these trends have been supported by conservative Catholics in the Supreme Court, and the American Bishops are lobbying hard on this issue. (The Court currently consists of three non-Catholics and six Catholics, almost half of the Catholics who have ever served in the Court’s 224 year history.)

In 2012,  Nate Silver statistically analyzed Supreme Court decisions over the past century and said that this court is the most conservative since 1930. This year, a separate analysis showed that the Court increasingly sides with businesses and against workers when the rights of the two clash. The U.S. Chamber of Commerce had dramatically increased involvement in court cases, from 4% in the 1980’s to 24% today. When the Chamber weighs in on a case, the ruling almost always goes their way. The stark contrast with past decades prompted Elizabeth Warren to ask whether the Court was becoming a subsidiary of the Chamber of Commerce.

Most Americans agree with the Catholic Bishops that bringing a child into the world is one of life’s most important, even most sacred decisions. Most of them don’t agree with the bishops that the decision is one best left to God himself. The vast majority of American women and men rely on modern contraception to delay, space or limit their childbearing. Many American’s, including Catholics believe that a thoughtful, intentional approach to childbearing is a moral or spiritual responsibility. They don’t want insurance constraints that make this harder, and they especially don’t want their boss attempting to influence when and whether they have a child. Whose freedom of conscience will the court decide has top priority?  Who will get to choose how working Americans manage their families?  We’re all waiting to see.