What World War Z and Washington State Have in Common 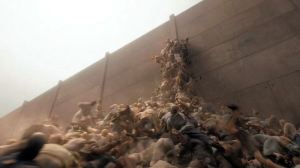 Did anyone see the World War Z scene where the zombies reach the top of a massive zombie-proof wall and start pouring over? The same thing has finally happened to Jefferson’s wall of separation between church and state. Council members in Pierce County, Washington got busted last week because they allocated taxpayer dollars to fund not one, but two evangelical missionary organizations that target public school kids for conversion.

Earlier this month, as the Pierce County Council worked to finalize their budget for the year, one member slipped in an amendment that directed $7,000 from youth violence prevention funds to Child Evangelism Fellowship, the subject of investigative journalist Katherine Stewart’s book, “The Good News Club—The Christian Right’s Stealth Assault on America’s Children.”

Over the top of the wall and into the playground.

The phrase “wall of separation” was first used in a letter that Thomas Jefferson sent to the Danbury Baptist Association in 1802. The Danbury Baptists, a minority in the newly-formed state of Connecticut, felt that their religious freedoms were being infringed by the Christian-dominated state Legislature and wrote to the President for encouragement. Jefferson reassured them:

Believing with you that religion is a matter which lies solely between man and his God, that he owes account to none other for his faith or his worship, that the legislative powers of government reach actions only, and not opinions, I contemplate with sovereign reverence that act of the whole American people which declared that their legislature should ‘make no law respecting an establishment of religion, or prohibiting the free exercise thereof,’ thus building a wall of separation between church and State.

Jefferson’s letter refers to the Free Exercise clause of the U.S. Constitution. The clearest early declaration that the U.S. government promotes no religion, at least no Christian religion, is found in the Treaty of Tripoli, an agreement to protect U.S. trade shipments from pirates in the Mediterranean. The treaty was approved unanimously by the Senate and signed by Adams in 1797.

As the Government of the United States of America is not, in any sense, founded on the Christian religion — as it has in itself no character of enmity against the laws, religion, or tranquility, of Mussulmen [Muslims] — and as the said States never entered into any war or act of hostility against any Mahometan [Mohammedan] nation, it is declared by the parties that no pretext arising from religious opinions shall ever produce an interruption of the harmony existing between the two countries.

But that was before the age of zombie apocalypse.

CEF makes no bones about their mission. In 2011, I interviewed a Seattle parent, John Lederer, about CEF’s attempt to establish activities at his local school. At the time, their website proudly proclaimed, “The Gospel has been taught freely in public schools all over the world for some time. Now children in the U.S. have that opportunity, too!”  Lederer sat in on the Good News Club at his school and was horrified by what he saw:

They teach a very fairy tale version of the Christian faith.  For example, they give the kids little puzzle toys that are fun to play with but really it is a wordless tract.  A black heart shows the original sin in each child, gold is heaven, a red cross represents the blood of Christ, a white heart represents the pure child who has found salvation.   My kid played with it for 20 minutes.  I didn’t tell her what it is supposed to represent.  The idea is that the kids bring it to school and other kids ask about it.

In recent years, CEF fought all the way to the Supreme Court and won the right to use public facilities for after school programs that teach kids they are sinners saved by the blood of Jesus – the very stuff of Religious Trauma Syndrome. (They argued to the court that they teach moral values, rather like the Girl Scouts.) Direct funding of the program in public budgets is the next step, and part of a broad national trend toward Christian funding evangelism and other church expenses on the public dime.

The Washington State Constitution has even stricter protections for church-state separation than the U.S. Constitution: “No public money shall be appropriated or applied to any religious worship, exercise or instruction, or the support of any religious establishment.” Once the $7000 allocation stirred up controversy, one Pierce County council member, Connie Ladenburg, proposed copying the constitutional language into the county code. Five of seven council members voted against her.

Jim McCune, who had proposed the CEF allocation, argued that funding the Christian missionary organization wasn’t really public funding of religion: “Yes, [CEF] may come from a certain book [the Bible], but it’s not a so-called religious foundation. Completely separate.”

McCune insisted that CEF is “non-denominational.” The term is often mistaken by the general public to mean “interfaith”, but in evangelical circles it means that an organization derives its beliefs from biblical literalism rather than any denominational hierarchy. The money would not be used to purchase religious materials according to Marlene Stoll, director of CEF’s Pierce County Chapter: “We just want to push God’s love for us and how it can make a difference in our life.”

In case you were wondering, that’s not religion; it’s a relationship.

Humanists of Washington President Sam Mulvey took the issue to the airwaves on his local radio show, Ask an Atheist. “The County has no business using tax dollars to fund a religious organization’s evangelism activities,” Mulvey said. “Imagine if Tacoma gave me $1500… to take your children… and tell them that religion poisons everything. Is that something you would like? Is that something you want in schools?”

After the county received dozens of complaints, the $7,000 was reallocated to genuinely nonsectarian activities and the county budget was approved. All’s well that ends well. Except for one small overlooked item.

Buried elsewhere was a line item that allocated $15,000 to Young Life ministries. Their mission? “Introducing adolescents to Jesus Christ and helping them grow in their faith.”

An earlier version of this article appeared at:  http://crosscut.com/2013/11/25/education/117624/zombie-apocalypse-threatens-tacomas-church-state-s/

Related:
Our Public Schools, Their Mission Field
Why Good Christians Do Bad Things to Win Converts

Seattle psychologist and writer. Author - Trusting Doubt; Deas and Other Imaginings.
View all posts by Valerie Tarico →
This entry was posted in Christianity in the Public Square and tagged Church state separation. Bookmark the permalink.