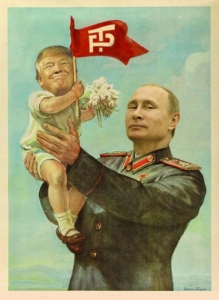 It appears that Vladimir Putin and like-minded Americans captured the electoral college by manipulating the flow of information and disinformation. Was the U.S. election an information-age coup?

In the most familiar kind of traditional coup, members of a minority faction in the military seize the reins of power at gunpoint and install leaders who share their goals. That would not have worked in the United States in 2016. While there are dissenters in any group, America’s military remains broadly committed to our 200-year-old experiment in democracy, even when things don’t go as some might prefer. So, when Russia’s leadership and intelligence community decided they wanted an ally in Washington D.C., they had to take a different approach.

And they found one.

Since World War II, Russia’s government has relied heavily on disinformation to manipulate public opinion, both at home and in Eastern Europe. From the heavy-handed propaganda posters of the Stalin era, the Kremlin has transitioned to increasingly sophisticated and targeted messaging, as has the advertising industry more broadly.

Manipulation works best when people don’t feel manipulated—when the agent doing the manipulating simply identifies and amplifies specific fears, hopes, and attitudes in their target audience, or else feeds doubt and confusion, which then increases the likelihood of the targets behaving as desired. On occasion this can be accomplished even by spreading factual information but in a way that skew proportions relative to other kinds of factual information, and so skews perceptions and priorities. For example, in the U.S., the Right uses “fair and balanced” presentation of null-effect climate research for this purpose.

Russia’s government aggressively distorts information related to their own international behavior—for example painting themselves as the victims during their 2014 invasion of Crimea. But until recently, the Kremlin had limited ability to manipulate the internal affairs of other countries beyond the Balkans. Rapid changes in media and information technology have changed that. The Kremlin now finances * a $400 million media operation that reaches over 100 countries and includes extensive social media operations. The Russia Today network broadcasts a wide range of news and entertainment, but with a selective filter on issues relevant to the Putin administration’s economic and political objectives.  *[This link lead to a speech given by the US ambassador to Germany: “Ambassador John B. Emerson gave the opening remarks at “Exposing Russian Disinformation in the 21st Century,” a conference sponsored by the Atlantic Council, the European Council on Foreign Relations, and the Heinrich Böll Foundation on June 25, 2015 in Berlin.” The article was pulled from the Atlantic Council website on December 14, 2016 but can be viewed at the cached site, or I have a copy.]

Countries around the world are waking up to the fact that their own populations and internal affairs are more vulnerable than ever to manipulation from the outside—especially by social media.  Putin sees this as a way to regain superpower status –by using media to redirect the machinery of outside democracies to serve Russian interests. Not that Russia is alone in this attempt. Since World War II, the U.S. State Department has produced Voice of America radio, which broadcasts across borders into other countries in an attempt to shape their internal affairs. The game isn’t new; it’s just being played on a new platform—online—and on a whole new scale.

This has been a year of aggressive moves for Putin, and not only in the Syrian conflict. It appears that Russian operatives may have pursued their known goal of  undermining the European Union by influencing Britain’s Brexit vote and the upcoming German election. As is becoming clear, this fall Putin also saw an opportunity to influence America’s election thanks to a storm of factors:

The Candidate: Donald Trump, with his strong business ties to Russia and otherwise ignorance of geopolitical affairs, emerged as the Republican candidate.

The Spys and Hackers: Security weaknesses allowed likely KGB hacking of DNC emails, which were given to Wikileaks founder Julian Assange and selective released to maximize election impact. (Note that Assange continues despite electronic evidence to deny that the KGB played a role.) Meanwhile Russia had the benefit of a valuable ally in FBI Director, James Comey, who kept public outrage about email security focused on Clinton’s server. I don’t mean to imply that Assange or Comey was intentionally working for a foreign state. My best guess is that they, like many others, had their own reasons for wanting a Trump presidency. In any coup, participants do what they do as a means to their own ends. In any war, including a propaganda war, the role of the generals is to see a pattern of opportunity in the existing landscape, and to use it.

The Social Media: By spring of 2016, a majority of American adults said that they get news via Facebook and other social media. This means their news is filtered by mathematical algorithms that monitor what kinds of titles and topics go viral among what kinds of people. It also means that media, increasingly, are generated not by venerable institutions with ethics standards and reputations at stake, but by well-heeled opportunists or back room hackers seeking “click count” and ad dollars. News is whatever sells, whether or not it is true, proportional, or important—and unfortunately things that are true, proportional and important often are far less interesting than oversimplified hype.

Tabloid and social media horror stories about Clinton built seamlessly on top of a 100 million dollar campaign to discredit Bill and Hillary Clinton, waged by American conservatives over almost 20 years and conducted largely through repeated tax-funded and privately investigations. This disproportional and distorted scrutinizing of Clinton’s actual failings was supplemented by fake news, some motivated by profit and some motivated politically. Many members of general public didn’t realize how pervasive and dangerous fake news had become until a gunman showed up in a D.C. restaurant armed with an assault rifle, intent on disbanding a fake child sex-trafficking ring run by Hillary Clinton and colleagues.

The Left-Right Divide: In the field of neurology, doctors who are trying to treat uncontrollable seizures sometimes sever the connection between a person’s left and right hemispheres. With a severed corpus callosum, the right and left brain literally can’t communicate with each other, and each may have a different perception of what’s going on. America’s Left and Right have a similar split-brain problem. Geography, religion, and those social media algorithms now separate us so completely that corrective information can’t flow across the divide. This makes a disinformation campaign cheaper and easier to conduct, and harder to protect against.

The Desperate and Declining Working Class: Pulling off a coup in a democracy means moving votes, and while security experts had concerns about our voting machines being hacked, it appears that the Russians and their American allies did a brain-hack instead. They didn’t hack the vote; they hacked the voters. And to do so they tapped in to the lived experience of economic decline, genuine distress about decaying communities and overwhelming culture shifts, and racial resentments that are painfully common among members of the struggling white working class. Nobody in Russia created these struggles and resentments or even suggested that Trump make them his campaign platform. They simply amplified what already existed—as Trump himself did via his campaign megaphone.

The Archaic Electoral College: As we all now know, the archaic peculiarities of our electoral system mean that the person who wins the vote doesn’t necessarily win the presidency, and in fact we can expect that that the vote winner will be denied the presidency with increasing frequency as population demographics shift. The electoral college system means that a vote from a California resident counts about half as much as one from a Wyoming resident, for example. It also means that a disinformation campaign doesn’t have to toggle the whole vote; it can selectively target the electoral college via swing states, which is exactly what happened.

A military coup is fantastically expensive and disruptive. By contrast, a disinformation coup—especially one that can be selectively targeted to a few voters because the country is divided and corrective information doesn’t flow across tribal boundaries is cheap. In this case, it was made all the cheaper by the structure of the archaic electoral college, and the fact that one doesn’t need to win the vote to get the presidency.

Under normal circumstances, leaders of the Republican party fiercely defend American independence and reject anything that might compromise our autonomy, including treaties, trade pacts and global bodies like the United Nations and World Court. But It is remarkably hard for people in power to push back against the system that put them there. In a successful coup, the people who end up in power have what they want. And in a perfect disinformation coup, they feel like they would have wanted it even if they hadn’t been played.

How many Republicans will find it in themselves to stand up for America’s democracy given that, at least in the short run, their party has just benefited from foreign interference? And if they don’t stand up, what will be the message to the rest of the world, and to the Russians themselves?