Sustain Between the Sheets!

Posted on November 6, 2014 by Valerie Tarico 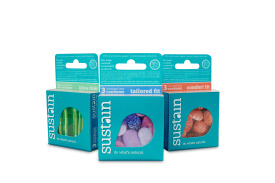 —– When Meika Hollender’s dad, superstar green entrepreneur Jeffrey Hollender, first brought up the idea of founding a condom company together, Meika wasn’t quite sure what to think. But she was in business school at the time, so she did what MBAs are trained to do. She started asking questions of potential customers, meaning she talked sex and condoms with her classmates.

What she heard convinced her that her father was onto something: “Women felt left out of the conversation about condoms,” she says. “They couldn’t relate to the marketing. Paired with that, as I talked with peers and asked about condom usage it was shocking that MBA women who are smart and successful weren’t using condoms consistently when they had sex. There clearly were business opportunities around creating a brand that women want to buy and carry and use.”

In their haphazard approach to contraception and safe sex, Meika’s fellow MBA students are part of a broader cultural norm. Half of pregnancies in the United States are unintended. Make that 70 percent for single women under 30. If Meika could launch a product that made even a small change in that abysmal record, she figured it would do as much for empowering young women—her passion in life—as anything else she might try. She told her dad that she was ready to go and the two of them jumped into the niche. This fall their new venture hit store shelves, a line of fair-trade, eco-friendly condoms called Sustain targeted at young women.

The single best way to make any contraceptive more “green” may simply be to make it more appealing to more people so that excellent family planning becomes the new normal. Sustain’s fresh positioning and appeal to women may be the most eco-friendly thing the company can do. But it isn’t the only thing.

The Sustain approach begins with a focus on the rubber trees and harvest. Jeffrey, after all, is a serial green-entrepreneur best known for founding Seventh Generation, a line of earth-friendly household products with annual retail sales of more than $300 million.

Many commercial rubber plantations are monoculture “deserts,” inhospitable to wild birds and animals, but rubber doesn’t have to be grown that way. The Hollenders found a source that provides the equivalent of shade-grown coffee.

To make matters worse, conventional plantations rely heavily on child labor. In Liberia, which is a major rubber exporter, up to 60 percent of school-age children are employed in the trade instead of attending classes. Sustain chose a manufacturer in India that fit the Hollenders’ values: workers are unionized, making approximately three times the going rate; solar panels grace the roof; each workroom has a window; and both manufacturing and raw materials are free of child labor. The manufacturing process and condoms themselves are free from nitrosamines, a common byproduct that is a known carcinogen.

One challenge the company faces is discomfort around the whole topic of rubbers. The Hollenders have been surprised at the strength of taboos and biases they have bumped up against since launching Sustain. Remarkably, many Americans, when they associate condoms and women, still think promiscuity rather than health. Meika has been warned by friends that having “all those condoms” in her apartment may be off-putting or intimidating to guys. It may send the wrong message.

That this conversation could take place between MBA students or young entrepreneurs says a lot about the powerful, toxic residual of misogyny that feminist author Jessica Valenti calls out in her book The Purity Myth. We’ve come a long way from the time when a woman’s sexuality and fertility were literally possessions of men, but we’ve got a long ways to go.

That said, North Americans are engaged in a vigorous conversation about the sexual agency of women (think yes means yes), and norms are changing.

When it comes to managing fertility, today’s young women have options that their mothers and grandmothers could only have dreamed of. Top tier “set and forget” long-acting, reversible contraceptives (LARCs) drop the annual pregnancy rate below 1 in 500, far better than the Pill (1 in 11) or the condom (1 in 9), and the good news is that as women gain access to these methods, surprise pregnancies are plummeting. But even for women with LARCs, condoms remain the best method available to prevent sexually transmitted infections. Think condoms, think health. That is what Jeffrey and Meika Hollander want to imprint on customers’ minds with their approach to manufacturing and design.

Sustain packaging evokes a loofa sponge or apricot-cucumber facial. It seems to belong beside the Bert’s Bees and tea tree oil and lavender lotion on the natural cosmetics and skin care aisle at your local co-op. On each box, a tear-drop window reveals bamboo or sea urchin shells or beach stones on the thin envelope underneath. (Looking at them, I found myself thinking, I like the stones. I want that one for my wallet.)

The Hollenders are betting that other women will have the same reaction. Jeffrey sums up their dream by paraphrasing an old Microsoft tag line: A condom in every purse.

An earlier version of this article appeared at Sightline.org, a regional sustainability and livability think tank based in Seattle, Washington.

Valerie Tarico is a psychologist and writer in Seattle, Washington. She is the author of Trusting Doubt: A Former Evangelical Looks at Old Beliefs in a New Light and Deas and Other Imaginings, and the founder of www.WisdomCommons.org. Her articles about religion, reproductive health, and the role of women in society have been featured at sites including AlterNet, Salon, the Huffington Post, Grist, and Jezebel. Subscribe at ValerieTarico.com.

Related:
Pediatricians Give Thumbs Up to Game Changing Birth Control for Sexually Active Teens
The Obvious Relationship Between Climate and Family Planning—and Why We Don’t Talk About It