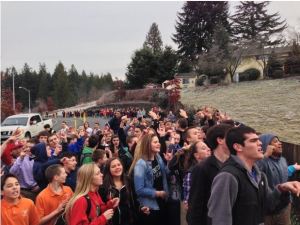 In late December, while marriage equality became law in New Mexico and Utah, a Washington vice principal and coach at a Catholic school got fired for marrying his partner and a Philadelphia Methodist minister was defrocked because he performed a wedding ceremony for his son. Earlier in the month, Notre Dame University filed suit to ensure that student and staff insurance wouldn’t cover contraceptives, while a Michigan couple simultaneously sued the Catholic Bishops claiming that religious directives in a Catholic hospital had forced her doctors to commit malpractice during a miscarriage and nearly cost her life.

In all of these cases, Church dogmas and mandates are out of line with not only America’s secular government and growing population of nontheists, but also the spiritual and moral beliefs of members—beliefs about what God wants and how we should then live. Defrocked Methodist minister, Frank Schaefer, reports that even those making the decision on his regional Board of Ordained Ministry were torn. Per Schaefer, some came to him with tears in their eyes, “They said, ‘We really don’t want to do this, you know that, don’t you?’”

In Bellevue, Washington, students at Eastside Catholic responded to the firing of their beloved vice principal and coach by pouring en masse into the street outside the school, where they chanted, “Change the church!” Students at other Catholic schools responded with tweets and solidarity sit-ins. But changing the Church is easier said than done. Even Pope Francis, who is increasingly beloved for allying himself with the poor, has made no substantive movement on issues of equality for women and gays. In fact, the first priest excommunicated under his rule was stripped of authority because he advocated ordination of women and performed a gay wedding. As one 71-year-old practicing Catholic put it, “I believe that the Catholic Church will come to the point where we will legitimize gay marriage. But it’s going to take time.”

Christians see themselves as a light shining on a hill—a moral beacon to the world—and the faithful love to say that they have taken the lead in humanity’s moral growth, in the abolition of slavery, for example. Indeed many great abolitionists were inspired in part by their faith. But the darker reality was that Christian texts and teachings had been used for centuries to justify slavery and less extreme forms of economic servitude, and the Christian abolition movement emerged only in concert with broader cultural and economic changes. A close look at history suggests that moral and spiritual changes occur independent of religion, and then religion gives voice, organizational structure and moral authority to those changes—and often claims the credit.

Why do churches so often have to be forced to admit what has become obvious on the outside—that slavery is wrong, that no skin color or bloodline is spiritually superior, that love can grow between two people of any gender, that women and children are fully persons and not possessions of men, that the pleasure and pain of other species matter profoundly, or that bringing babies into the world with thoughtful intention helps families to flourish?

Religion, by its very nature, is change averse. Each religion explains and sanctifies a specific set of cultural agreements—a worldview that is a snapshot of human history. Most of today’s largest religions emerged during what is called the Axial Age—a time in which male superiority was assumed, the wheelbarrow had yet to be invented, and nobody knew that the other side of the planet existed. People at the time were doing the best they could to understand what was real and what was good, what caused what, and, especially, why there was so much suffering and death. They fused what they knew about the way things worked with their understanding of human power hierarchies, and they made gods in the image of men, both literally and psychologically. They turned rules into Rules.

At the time the original agreements emerged, many of them served human wellbeing. But what is adaptive in one context can be maladaptive in another—and what is moral in one context can become immoral in another. When rules become Rules, when they become sacred, people forget why they existed in the first place. I once heard a joke that stuck in my mind because it so beautifully illustrates this aspect of how religion works:

A girl is watching her mother prepare a roast. The mother carefully trims a thin slice off of each end before putting it in the pan. “Why do you trim the ends off?” asks the girl.

“I don’t know,” answers the young mother. “That is the way your grandma did it.”

The next time the woman speaks with her own mother she asks, “Why do you trim the ends off of a pot roast before cooking it?”

It happens that the girl’s great-grandmother is still alive, and sometime later the family pays her a visit. “Why do we trim the ends off of a pot roast before cooking it?” the young mother asks. “I don’t know why you do it,” the great-grandmother answers. “I always did it because I had one small baking pan and a small oven, and that was the only way the roast would fit.”

Tribalism, patriarchy, and pro-natalism had their place in history. There was a time when blood-loyalties and hierarchy likely increased cooperation and reduced conflict. There was a time that infant mortality was high, men and women had no control over their fertility, and it made sense to honor and maximize childbearing. In this context, the Abrahamic religions may well have helped people survive and thrive. But the very structures that once let communities and families flourish have become a source of strife. Rules and rituals that bound people together now drive them apart. They have become mere tools of entrenched oppression.

The high school students who stood in the cold chanting “Change the Church” can be seen as naïve idealists who don’t understand how religion works and why. Alternately, they can be seen as people whose eyes aren’t clouded by the veil of history, who are free to trust their own sense of compassion and fairness and draw hope from the future rather than some idealized past. 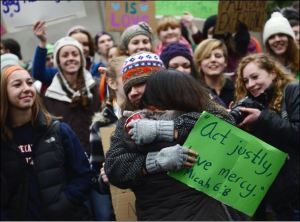 And yet even they get inspiration from struggles of our ancestors, gleaning what seems timeless and wise from among the mixed fragments in the Bible and Christian history. One young girl stood in the crowd holding a sign with the words of the Hebrew prophet Micah (6:8): Do Justice. Love Mercy. As news of student protests spread, alumni of the same Catholic schools took up the torch. When the hierarchy didn’t budge, the students announced that they are taking their fight for justice to the next level:  a national day of protest, dubbed Z-day (in honor of Mark Zmuda), on January 31. Sometimes it takes a teen to remind us of who we are and what really matters.

Related:
Captive Virgins, Polygamy, Sex Slaves: What Marriage Would Look Like if We Actually Followed the Bible
Making Marriage Last – Do Atheists Do It Better?
Why I hope Conservative Christians Will Keep Fighting Gay Marriage Tooth and Nail

Seattle psychologist and writer. Author - Trusting Doubt; Deas and Other Imaginings.
View all posts by Valerie Tarico →
This entry was posted in Christianity in the Public Square and tagged gay rights, marriage equality. Bookmark the permalink.