My Abortion Was Different: Why Women Shame and Blame Each Other

We’ve all heard stories, apocryphal or not, of women who picket family planning clinics and then cross the line when they find themselves with a problem pregnancy. One doctor tells of a patient in stirrups saying, “I don’t belong here, you know.”  The subtext: “I’m not one of them.”

It may be satisfying to gloat about flagrant hypocrisy, but here’s the catch: most of us have as little immunity against double standards as those picketers have against unwanted pregnancy. From the vantage point of many individual patients, every abortion provider in America has a waiting room full of women who are tainted and one who doesn’t belong there. Even women who see themselves as feminists and who are staunch choice advocates may find themselves caught off guard at times by their thoughts and feelings when someone they know terminates a problem pregnancy. Why do objectivity, self-awareness and compassion so often get left at the clinic door?

At least part of the answer lies is some very basic flaws in how human minds function. We humans are social information specialists – that is our evolutionary niche. We thrive by managing vast arrays of information, primarily input about and from other people, and the way that we organize this information is largely in the form of stories: temporal sequences in which one thing leads to another. The fact that there are now seven billion of us suggests that all of this works pretty well. Unfortunately, the capacities that serve us so well also create some baked-in biases that skew the stories we tell ourselves about each other.

Quest for Causal Agents. Imagine a Hollywood blockbuster in which there are no good guys or bad guys. Shit just happens for no apparent reason, and ordinary people, whether pretty or ugly, nice or mean, just muddle along dealing with flat tires, fallen trees, and condom failures. You haven’t seen this film, because screenwriters know what our brains are attracted to. A good story demands a protagonist and a plot. Instinctively, we want to know who done it and why. In real life, most events have many, many causes—complicated webs that would be tedious or even beyond our ability to analyze. But in stories, whether Hollywood films or the stories we use to explain the world around us, we focus on the behavior and intentions of a few people or even one. Somebody gets credit or blame.

Blaming the Victim. To make matters worse, we desperately want the world to be fair, which means that our view of how much credit or blame people merit is disproportionately affected by outcomes. Social scientists use the term “Just World Hypothesis” to describe this bias. In our minds people tend to deserve what they get and get what they deserve. This is true to the point that when a person receives a random windfall like lottery winnings we are likely to upgrade our perception of his or her character. In a more ugly manifestation, when misfortune strikes, we tend to blame the victims – downgrading our assessment of their character and looking for explanations in their own antecedent behavior. If someone needs an abortion, which is an unpleasant, expensive, and in our culture shame-laden procedure, we instinctively suspect that she is at fault.

Actor-Observer Bias. For each of us, one person is largely exempt from this reflexive harsh assessment –ourselves. (To a lesser extent we also exempt people we love, for whom we often can “put ourselves in their shoes.”) Ironically, this is because another habitual form of cognitive skew comes into play—the actor/observer bias.  In explaining the problems of another person, we tend to make attributions about character traits and habits:  She didn’t get the lawn mowed because she is lazy. He missed the appointment because he is flaky. His condom broke because he’s not careful enough. She got pregnant because she sleeps around. When we explain our own problems, we focus on external events: I didn’t get the lawn mowed because the kids made one mess after another. I missed the appointment because my phone battery died and I couldn’t check my schedule. Our condom broke because it had a flaw. I got pregnant because I was unlucky.

The three kinds of biases I just described (and others!) are so built into the human psyche, that to a greater or lesser degree they are problematic for all of us all of the time. But cultural dynamics can make them worse. In the case of unwanted pregnancy, misinformation, slut shaming and anti-abortion rhetoric mix with our built-in flaws to create a particularly toxic brew.

Misinformation. Widespread misperceptions about how well contraceptives work –or rather how often they don’t work—contribute to the blame game. Contraceptive manufacturers and researchers often report “perfect use” statistics rather than real world figures of contraceptive efficacy, and the statistics for perfect use suggest that contraceptives work almost perfectly. But consider an analogy. Auto makers also advertise how their products work under optimal conditions, but well-informed consumers don’t expect the same performance from their own cars. Nobody counts on a car’s gas mileage matching the manufacturer decal, nor do we expect that a tired driver under adverse conditions can hit the brakes and stop as quickly as test drivers do on dry tracks. Rather, we expect both cars and humans to have limitations and perform imperfectly. In fact, Detroit employs a cadre of “human factors engineers” whose job it is to anticipate how cars and drivers will function in the real world and then to design around predictable problems. Perfect use statistics ignore the human factors part of the equation.

Like automobile drivers, contraceptive users have an error rate that, in aggregate, is completely predictable.  Contraceptive technologies are reliably imperfect, in large part because of how human beings themselves are built. Nature designed us to have lots of babies in order to get a few survivors which means, among other things, lots of sex drive and high fertility. On average eighty-five percent of sexually active women will get pregnant in a year of unprotected sex. The contraceptive methods available to our ancestors—extended breastfeeding, coitus interruptus, and episodic abstinence (aka the rhythm method) all drop the rate significantly, but work only under very specific conditions that are almost impossible to maintain.

What most people don’t realize is that, until the advent of LARCs (long acting reversible contraceptives), modern methods also have been impossible for most people to use perfectly over time. They variously require a level of planning, attention to detail, self-discipline, memory, communication skills, or manual dexterity that may be characteristic of some alien species but not ours. Combine imperfect technology and imperfect humans and, on average, one in eight couples relying on condoms for a year will end up with an unintended pregnancy. For women on the Pill, that number is one in twelve. In other words, for men and women who are genuinely committed to family planning, access to abortion has been a necessary back-up.

Socially Constructed Reality. Religious and cultural taboos about reproduction contribute to the dearth of accurate information. Nowhere is this more obvious than in the passionate battles conservative Christians have fought to block comprehensive and medically accurate sex education. In the resulting vacuum, culture offers alternative narratives that fill the gap, all of which contribute to shaming and blaming. Only bad girls get pregnant. A fetus is a baby. Abstinence commitments work. Using contraception makes sex a premeditated sin. Family planning is playing God. Women have abortions because they are selfish. A fertilized egg has an eternal soul. Abortions cause psychological disorders and get punished with cancer.

These cultural and religious narratives play on some of our deepest emotions because they are designed to traumatize women out of having sex and having abortions. That is their function. When driven by biological imperatives, males seek to maximize their number of surviving offspring and ensure that the children they are raising actually are theirs. Historically, both of these goals require that men be in control of women’s sexuality, and the traditional institutions of culture and religion have been shaped to that end. Culture is the sea we all swim in; it is the air we breathe. In the absence of a countervailing force, repetition of a narrative creates belief. What this means for women is that we not only swim in a sea of frightening, shaming messages, we also absorb them.

Shame and Guilt, Denial and Distancing. Because these messages are so powerful and pervasive, we either believe them or spend psychic energy fending them off, or some combination of the two. Trust in ourselves as reproductive decision makers is precarious. When we think about women who actively manage childbearing by availing themselves of contraception or abortion, we rarely contemplate words like thoughtful, wise, responsible, strong, courageous, loving, or good parent—the qualities that we aspire to. Instead, we look across crowded waiting rooms and at either a conscious or subconscious level a neural network of culturally based slurs and cognitive biases gets activated. The last thing we want is to be one of them. 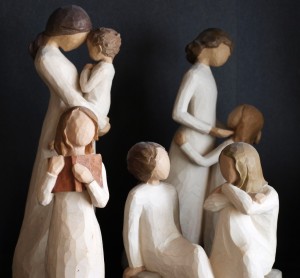 What is the solution? I said earlier that we are a species of social information specialists. That means our conversations with each other are tremendously powerful. Taking the risk of telling our stories, sharing what we know, and really listening has the power to change us and through us the culture of shame and blame. Stories can break down taboos and correct misinformation. They can even trump our built-in biases because they temporarily show us the world through another pair of eyes. Abortion stories often include stress, confusion, pain, conflict, or sorrow. They test our compassion. But there is more: deep thinking, wisdom, responsibility, strength, courage, love, and good parenting. Imagine sitting in a waiting room surrounded by women who embody these virtues. Not bad company at all.

Read more on abortion by this author:
The Difference Between a Dying Fetus and a Dying Woman
When God Was Pro-Choice and Why He Changed His Mind
Dramatic Drop in Teen Pregnancy Really a Technology Tipping Point
What the Right Gets Right About Abortion and the Left Doesn’t Get
The Big Lie About Plan B — What You Really Should Be Telling Your Friends
Righteous Abortion:  How Conservative Christianity Promotes What it Claims to Hate
Picture a Techology Revolution.  In Contraception.  It’s Here!

Valerie Tarico is a psychologist and writer in Seattle, Washington.  She is the author of Trusting Doubt: A Former Evangelical Looks at Old Beliefs in a New Light and Deas and Other Imaginings, and the founder of www.WisdomCommons.org.  Her articles can be found at Awaypoint.Wordpress.com

11 Responses to My Abortion Was Different: Why Women Shame and Blame Each Other