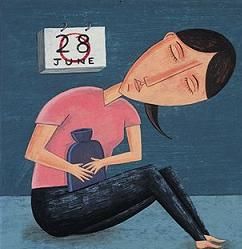 Seattle family planning doctor Deborah Oyer routinely asks new female patients, “How often do you want to have your period? Monthly? Every three months? Or not at all?” Until she asks, some don’t know they have a choice. Like every other aspect of reproductive health, menstruation is a fraught topic. A woman who is actively managing her period is in control of her fertility; in Judeo Christian folklore, she is cheating Eve’s curse. Even talking about menstruation can violate taboos. Consequently, most of us are astoundingly under-informed about a facet of womanhood that affects anyone who either has a uterus or loves a person who does.

For example, did you know that:

Over the centuries, many religious leaders have taught that women were made for childbearing, and some, known as complementarians, take this position today. Fortunately, few go as far as Reformation father Martin Luther: If a woman grows weary and, at last, dies from childbearing, it matters not. Let her die from bearing; she is there to do it. Complementarians are right in one sense: our bodies are optimized to produce the greatest number of surviving offspring, even if it costs us in other dimensions of health or wellbeing. In past centuries this meant a high level of mortality for women and babies. Historically, one woman died for every hundred pregnancies. When that is multiplied by a traditional number of pregnancies per woman, you get a maternal death rate close to ten percent, similar to what it is in Afghanistan today. Globally, half a million women die each year due to complications of pregnancy and childbearing.

Producing babies with big brains is rough, and our bodies work very hard each month to ensure that we have surviving offspring despite the odds. In a sense, each menstrual period is an incident of failed pregnancy. The uterine lining thickens just in case some lucky egg-sperm fusion should come along and attach itself to the endometrium. Even with this month-after-month cycle of preparing for pregnancy, it is now thought that most fertilized eggs fail to implant. From a biological standpoint, gearing up for pregnancy each month is costly, which has made evolutionary biologists curious about the advantages.  The evolutionary disadvantages are easier to spot: anemia, for example, and a blood or scent trail that might attract predators.

Menstruation and reproduction are as entangled with culture and religion as they are with each other. The ancient Hebrews justified the pain and trauma of childbirth, along with subjugation of women, through the Eden story. In it, Eve is created from Adam’s rib to be a “helpmeet” to him. Later, God punishes her for eating from the tree of knowledge: I will greatly increase your pains in childbearing; with pain you will give birth to children. Your desire will be for your husband, and he will rule over you. (Genesis 3:16)  In the Hebrew religion, menstruation was not only physically unclean, it was spiritually unclean, as was childbearing, and a woman was unclean for twice as long when she gave birth to a baby girl as a baby boy. On the other hand, in many cultures and for some women in our culture, menstruation is a point of pride. Childbearing is a form of power, one of the greatest powers in the world, and menstruation is a sign of that power. Onset is accompanied by rituals as solitary as days of isolation or as social as community feasting and dancing.

Given the cultural significance of menstruation, it should come as no surprise that a variety of groups and individuals are uncomfortable with the idea of women choosing or not choosing to have periods. In this regard religious conservatives find themselves in unfamiliar company. Some of their fellow advocates are wary of the medical establishment and instead promote natural living and alternative medicine. Some hate the “medicalization” of women’s bodies and reproductive health and think we should embrace menstruation as part of what it means to be powerful, female and sexual. Some believe that the ovulatory system has other health functions and shouldn’t be messed with. (Until the Population Council developed what is now the Mirena, it was not possible to actively manage menstruation without also suppressing ovulation.) Some have had bad experiences with hormonal contraceptives. Some find a spiritual rhythm and serenity in the monthly cycle. Unfortunately, the cultural or spiritual weight given to menstruation means that matter of fact, pragmatic information can get pushed to the periphery, distorted or even suppressed.

That is unfortunate for women who simply want to manage their lives. It is especially regrettable for millions of girls and women with debilitating cramps, severe bleeding or menstrual migraines. For most of us, how often we menstruate is not some form of cultural advocacy. It is a practical, personal question. Evolutionary programming aside, most of us don’t want to maximize our number of pregnancies. Many of us don’t care particularly about what religious leaders think of “Aunt Flo.” We simply want to take care of ourselves, our sex lives, and our children or future children. We don’t want cramps, bloating, back aches, nausea, fatigue, mood swings or migraines. But we do value our fertility and want to make sure that we can have babies when we feel ready. We are interested in avoiding anemia and endometriosis and plain old monthly malaise, but we are cautious about profit driven medical treatments that affect our reproductive tracts. Some of us also like to dance in leotards, swim in bikinis, race in triathlons, work in military combat zones, backpack in bear country, or wear white in the summer. All of this means that we want accurate, practical information and options when it comes to our periods.

Ironically, when research first began on the Pill in the early 20th Century, menstrual symptoms like dysmenorrhea (pain) and menorrhagia (heavy bleeding) were front and center in the conversation. Preventing conception itself was so controversial that it was listed as a side effect on an early application for FDA approval. In 1873, at the behest of anti-obscenity crusader Anthony Comstock, the U.S. Congress had passed the Comstock laws which made all contraception illegal. Condoms could be sold only for “feminine hygiene.” Such was the situation when Margaret Sanger’s mother died at age 50 after eighteen pregnancies and eleven live births. Sanger herself was tried for a Comstock violation in 1936. After that, prosecutions dropped away, but thanks in part to advocacy by Catholic leaders and conservative Protestants contraception remained controversial.  Feminine hygiene products, on the other hand, flourished, and so it was natural that as contraceptive technologies emerged so did carefully worded conversations about hygiene and menstrual management.

From the beginning, doctors recognized that there was no medical reason for women on the Pill to bleed, but they thought Pills would be more accepted by the public and by Catholic authorities if they mimicked a monthly menstrual cycle. For women who are taking oral contraceptives, monthly bleeding triggered by seven days of placebos isn’t actually menstruation, but rather a response to hormone withdrawal. Real menstruation is evidence of a feedback loop in which a functioning hypothalamus and pituitary signal the ovaries and uterus, causing a follicle to develop and egg to be released into an environment that is ready to receive it. The hormones in most oral contraceptives suppresses this cycle of ovulation. In other words, women who are on the pill to regulate their periods aren’t actually regulating them. They are suppressing them and replacing them with withdrawal bleeding, and benefits of menstrual suppression accrue whether the monthly bleeding occurs or not. For two generations, women using hormonal contraceptives have bled monthly for cultural reasons, most without knowing there were alternatives.

Fortunately we now have other options. No matter how often a woman wants to have periods, monthly, every three months, or not at all, there are state-of-the-art top tier contraceptives that can fit the choice. That is why Dr. Oyer’s question, “How often do you want to have your period?” is a reasonable one for her to ask her patients. If you are female, it is also a reasonable one for you to ask yourself.

Read more about contraception by this author:
Picture a Technology Revolution. In Contraception. It’s Here!
Dramatic Drop In Teen Pregnancy Really a Technology Tipping Point
Pamper, Pamper, Pamper – Plus 9  Other Tips for Falling in Love With Your IUD
Hey Ladies!  Thinking About Ditching Your Period?  A Doctor Answers 12 Puzzling and Hopeful Questions
The Big Lie About Plan B – What You Really Should Be Telling Your Friends

At Jezebel: A Brief History of Your Period and Why You Don’t Have to Have it